Sounds of a Sphere curates musical performances, embedded into animated digital paintings.
The aim is to capture the musical heart and soul of various cultures, placing the performances inside living artworks that visualise the theme / setting / mood of the song.
‍
This is achieved with chroma key, digital matte painting techniques and advances in AI that aid in creating cohesion between the performance and the artwork.

Below is a basic proof of concept, testing the validity of the technique using one of my artworks. This test has no music. 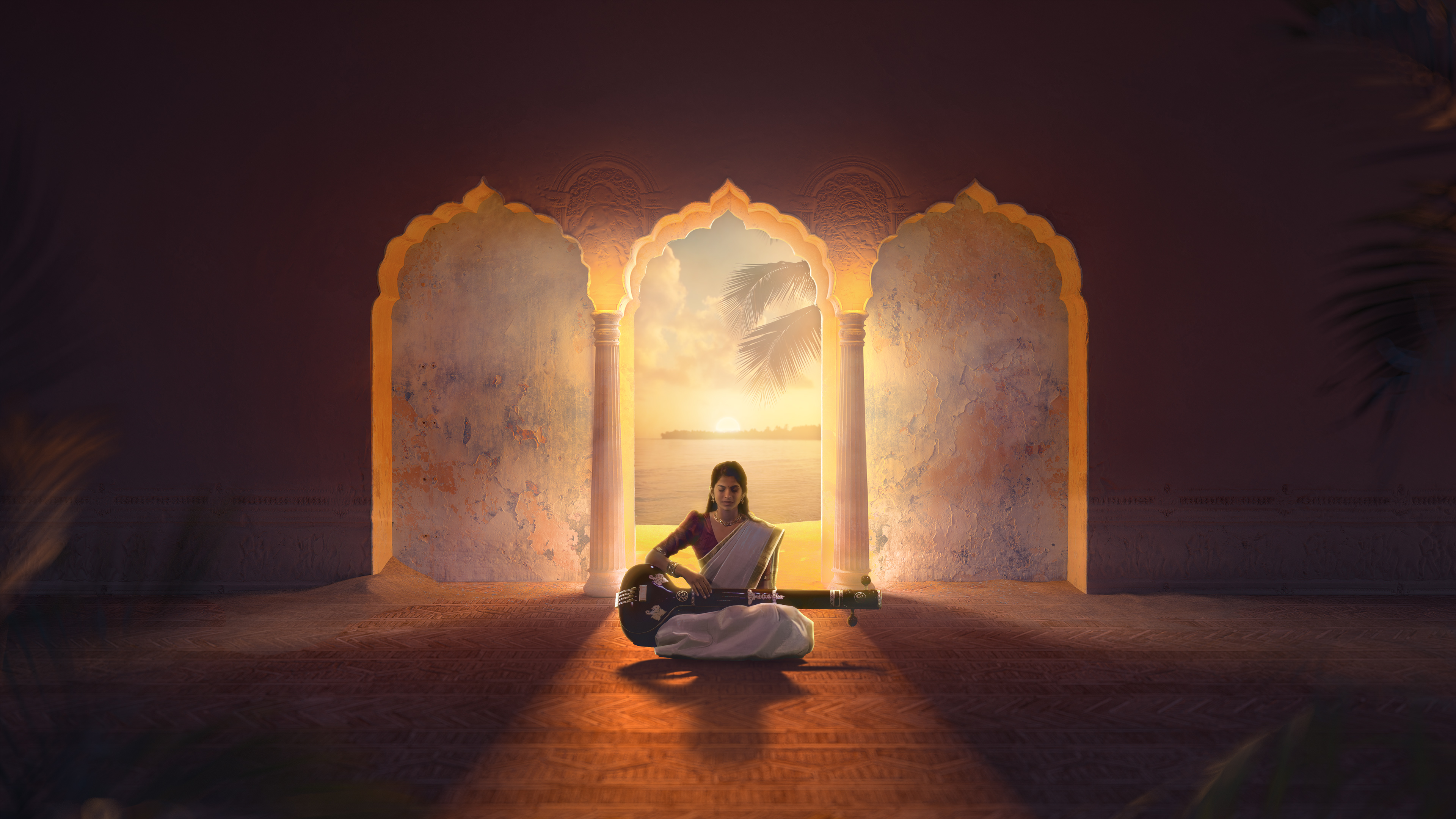 This is a still from work in progress, featuring an Indian (Tamil) classical performance.

The Music
The Art

'Less is more' is the general ethos here - emphasising dynamic melodies that embody a connection to culture and land. The song choices are capable of moving emotions and are in essence, beautiful. Think: Melodies of the heart. These could be joyous, energetic, or slow and sad. What matters is that a strong feeling is encapsulated - coming from a cultural and/or personal place.

'Cultural' is anything that resonates the creative heart and soul of a culture.
Sounds of a Sphere places focus on the simple, the sincere and the timeless.
‍
To captivate a listener’s emotions in totality I feel that in some cases all it takes is a single player: playing one instrument and/or singing with raw imperfection.
Overall, here are some examples: Peru, Norway, India, Hawaii, Armenia, Kenya, Chile

While blending contemporary with traditional, there is a preference for the simple yet beautiful folk songs that have survived the test of time and tell a historical story. Example: Greece's Seikilos Epitaph - one of the worlds oldest notated songs (200 BC)

As a mixing engineer, I aim to create a consistency in the style of mixes: emphasising warmth, and the feeling of ethereal space in relation to the setting of the artwork.
And lastly, as a keen tinkerer of foley sounds in sound design, where appropriate I may subtly decorate a song with the atmosphere that the theme provokes.

The artworks will initially be created by myself. In the near future, I wish to bring in other artists who have related cultural ties to the collaboration table. Any suggestions are welcome!

Artworks can be digital Eg) Photoshop, 3D or physical such as painting, drawing. Subtle animations are a great bonus.
‍
They could be simple and elegant, focusing on colours or a lack thereof, leaving much to the imagination...
Or rich and complex, painting a vivid scene.

In most cases, the art should not steal the focus from the performers.

Cues from the cultures historical artistic styles are strongly encouraged. Care/instruction will initially be shared from myself to ensure symbolic accuracy, in the hopes of avoiding kitsch, tacky or culturally appropriated art.
‍
How the art becomes animated
Using one frame, the artist paints over the performers, fitting the still into the artwork. An algorithm applies the style to the remaining frames of the filmed performance and the end result is a kind of music video, with the stillness and captivation of staring at a painting.

This could be a simple emphasis of highlights and shadows to match the backdrop, or a total stylistic makeover.

1. A choice of song (or songs) is offered by the musician.
2. The artist and musician agree on a song; discuss its mood & meaning / set & setting. We agree on filming a dub or live performance. A draft of the art-piece is created.
3. The musical performance is filmed against a green screen, correct costuming and a lighting setup to match the art-piece.
4. The performance is implemented into the artwork.
5. The music stems are mixed, and the resulting master is combined with the video.
6. The video is uploaded to YouTube, and if you desire, distributed (under your name) to Spotify, Tidal, Apple music and Bandcamp.
Titles on YouTube will be displayed as "Musician" & "Artist" - "Song name" ["Culture" music]
7. An NFT of the art/music video is created (optional - your choice), and the video + NFT are promoted.
8. NFT sale profits are distributed immediately.

I wish for musicians and artists to receive equal shares, conscious of equal input. If one party has put in more time than the other, profits will be balanced accordingly.

By default, any profits from video streaming or NFTs are divided by the musician (35%), the artist (35%) and brand (30% - covering costs and promotion).

It's important to me that this balance feels fair, thus this framework is negotiable.

I am a New Zealand born digital illustrator and producer / mixing engineer based in Auckland. You can view my artwork here.
I am one third of the musical act Kahika: Examples of my love for atmospheric sound design, which will be subtly incorporated in this project, can be heard here and here.

Outside of NZ, Australia and the UK, I've also lived in Germany, Romania and France. Most of my earnings over the last decade were spent on travel. As the number of countries I visited grew, so did my capacity to fully immerse myself; taking longer trips and deepening my curiousity in the people, the culture and its myriad forms of art/music.

If you have read this far, I thank you for taking the time to consider this proposal and I sincerely hope we can collaborate.
‍
Jonathan Hislop.